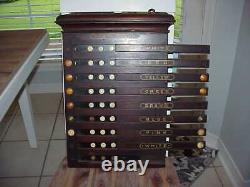 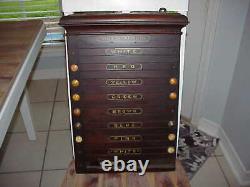 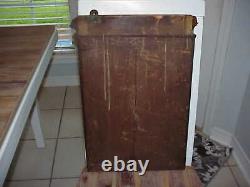 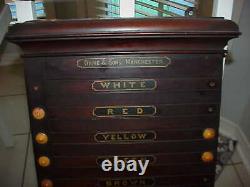 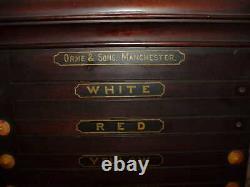 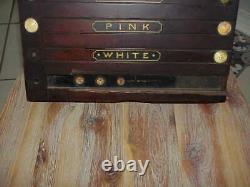 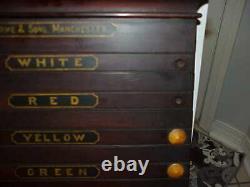 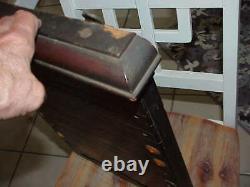 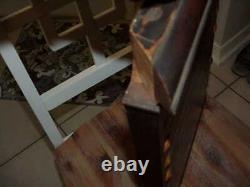 This is a rare piece of early billiards. As you probably know early antique billiard pieces are very hard to come by. This is a circa 1880's Life Pool Billiards score board made by Orme and Sons in Manchester England who was one of the premier makers of billiards in their time. It is made of solid Mahogany wood. It measures 20 1/2" inches tall by 13 1/2" inches wide.

It was meant to hang on the wall. It has 9 sliders with different colors to keep score of each individual players. The bottom slider bar is missing. Some of the buttons which keep score are missing. These can be easily replaced.

One of the original wall hangers is missing and on one side a small wedge block is missing on the side of the top of the frame. This really doesn't show that much when hanging. These are all minor repairs. I have had this piece hanging on wall for over 40 years. I have never done anything to it. The piece displays well and has always been a great conversation piece. You can read about Orme & Sons Billiards on the web. Please look at all 9 pictures which which is part of the description and shows the condition and details of this rare piece. Here is some history on Life Pool.

Life pool was a form of pocket billiards mainly played in the 19th century. Its rules were first recorded in 1819 simply as pool which remained its most common name among the British for about a century. In the United States, it was also simply called "pool" in the mid-19th century.

It was one of several pool games that were popular at this time. The object of the game was to be the last player left "alive" and therefore scoop the pool. Each player had three "lives" to begin with and would lose one when another player potted their coloured ball which was designated to them at the start of the game. Using the same number of balls as players, players take turns striking their designated ball with the cue in an attempt to collide that ball with one of their opponents' balls knocking the opponent ball into a pocket. Once a player lost their three lives, they were declared "dead", i.

The game continued in this way until there was only one player left, who was declared the winner. Around 1862, life pool spawned black pool, an ancestor of snooker, today one of the most popular cue sports in the world. The item "ANTIQUE 1880's ORME & SONS MANCHESTER LIFE POOL POCKET BILLIARDS SCOREBOARD" is in sale since Friday, July 16, 2021. This item is in the category "Sporting Goods\Indoor Games\Billiards\Balls\Other Billiards Balls". The seller is "davitcio" and is located in Gulfport, Mississippi.

This item can be shipped to United States.